A recent survey found that its not uncommon for people to consider vaping nicotine (or smoking cigarettes) when they feel stressed. The tobacco and vaping industries spend a lot of money, time and effort for their products to be in consideration as a “solution” to stress, but vaping nicotine can increase feelings of stress and anxiety.

Here’s the thing: If you smoke or vape, you’re probably going to tell us that it totally works as a stress reliever and we’re a bunch of idiots. We realize there’s a fine line between sounding like we’re ignoring your lived experience and being useful providers of scientific research and data. So hear us out, maybe?

What we’re going to do is break down what stress is, how nicotine (in cigarettes or in vape products like JUUL, PuffBars, etc.) impacts stress levels, how nicotine dependence fuels a frustrating cycle, and then we’ll throw in some general ideas for coping with stress in a way that doesn’t require using an addictive product. 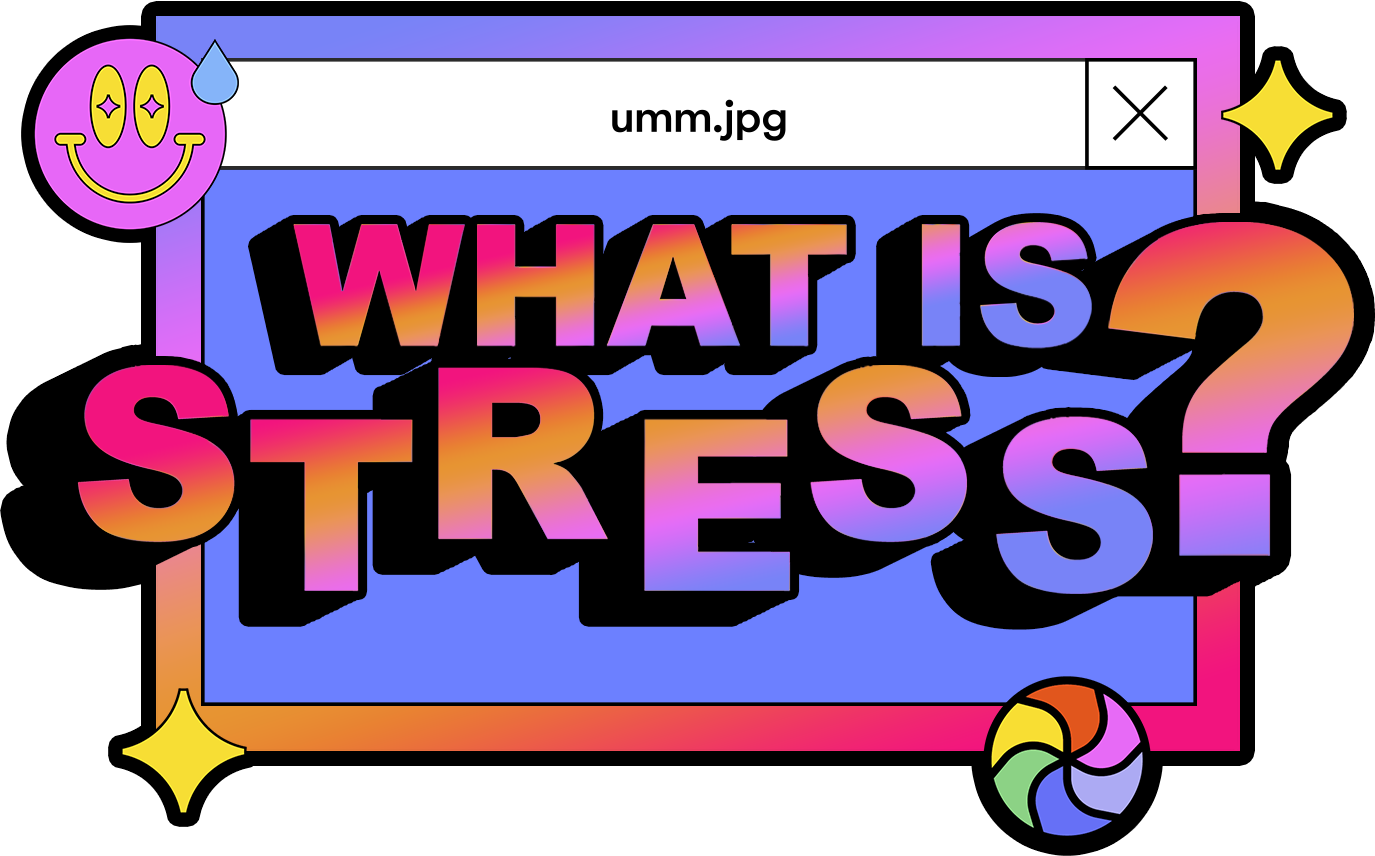 Stress is normal. It’s a physical and mental reaction to changes/challenges.

Basically, our bodies are designed to respond to “threats” like giant, angry bears in generally the same way they respond to “inconvenient annoyances” like having a phone conversation with the receptionist at your dentist’s office. And everything in between! Midterms? Stress response. Busy day at work? Stress response.

The stress response is an alert from the brain prompting the adrenal glands to release a ton of hormones, including adrenaline and cortisol. Adrenaline increases heart rate and boosts the body’s energy supplies. Cortisol alters the immune system responses; suppresses the digestive system, the reproductive system and growth processes; increases sugars (glucose) in the bloodstream; enhances the brain’s use of glucose… it’s a doozy, and makes you feel tense, hyper-alert, on-edge and focused. 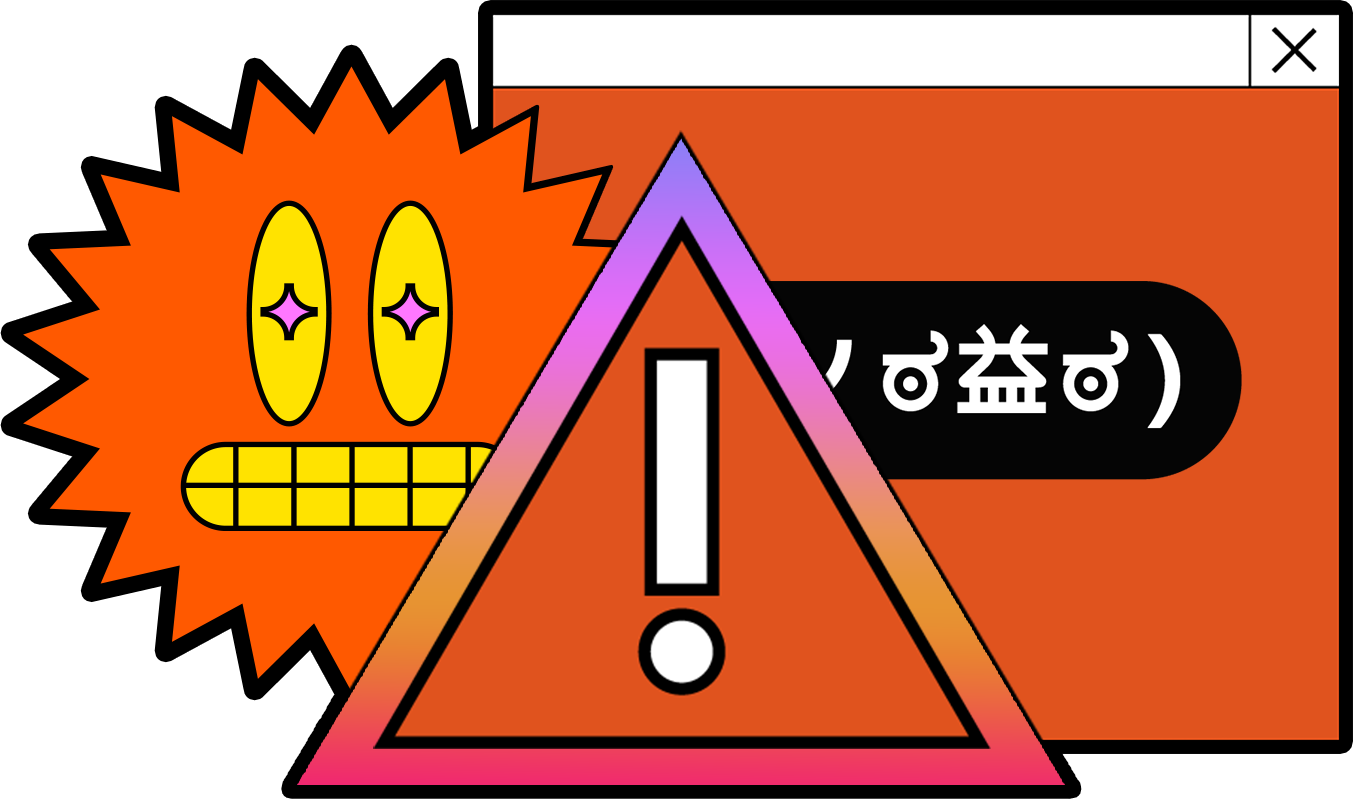 This response is temporary. Once the threat of bears–literal or figurative–has passed, your adrenaline and cortisol levels return to normal.

But let’s just say you’re facing angry bears regularly. You’ve taken a job as a shift manager at Angry Bears Unlimited, or you have to walk by Angry Bears Unlimited every day during peak rage hour, or you’re just trying to get through the day in a global pandemic of Angry Bears. Studies show the long-term activation of the stress response system–and the overexposure to cortisol and other stress hormones–can disrupt almost all the body's processes. And THAT puts you at risk for (and we’re just going to quote the Mayo Clinic here, since they said it best):

Nicotine constricts blood vessels and increases heart rate–which is similar to the natural stress response described above. There’s also some research that shows nicotine may trigger cortisol production. And all that said, you might be thinking, “eh, sounds like it might help me respond to stress/get super focused.” 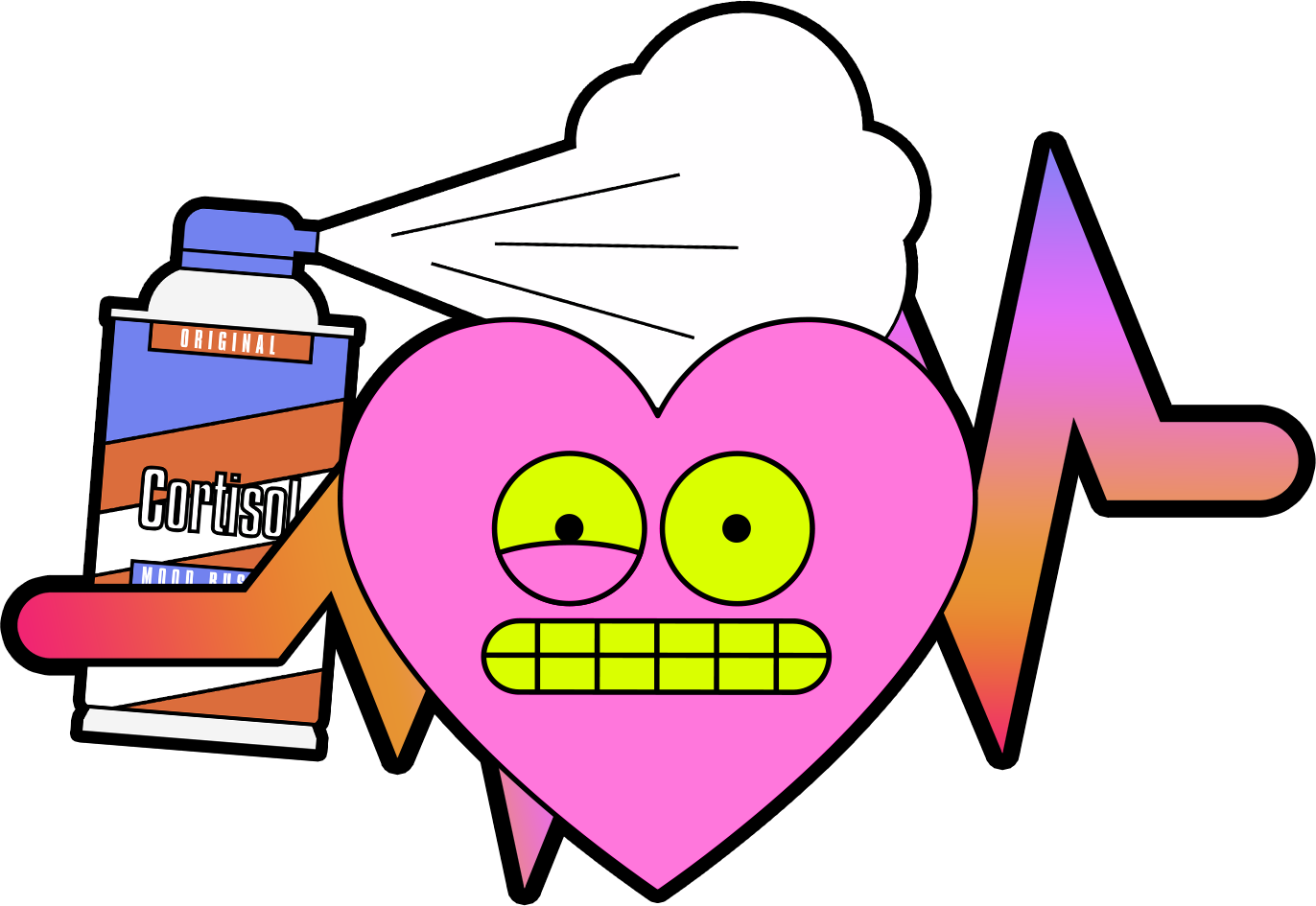 But if you’re regularly using a thing that can make your body respond “BEARS” when you’re looking at your bed, there’s a problem, Goldilocks. And that problem is overexposing your body to cortisol and other stress hormones that disrupt the body’s processes and put you at risk for everything the Mayo Clinic mentioned above.

Plus, nicotine rewires your brain. Your brain has billions of neurons that connect to each other and control everything you do/think/feel. Each and every neuron has receptors on its surface that communicate with other neurons. Nicotine can reactivate the nicotinic acetylcholine receptors in your brain that respond to stress, and actually increases nicotinic receptors over time, which “helpfully” provide that stressful feeling every time those receptors aren’t getting nicotine. In short: Vaping nicotine can increase stress levels.

This is the part that’s probably upsetting to some people, and we’re aware it’s irritating to have us tell you, essentially, your lived experience is wrong. But here we go.

Studies have shown the “stress relief” felt by smokers is akin to withdrawal relief. 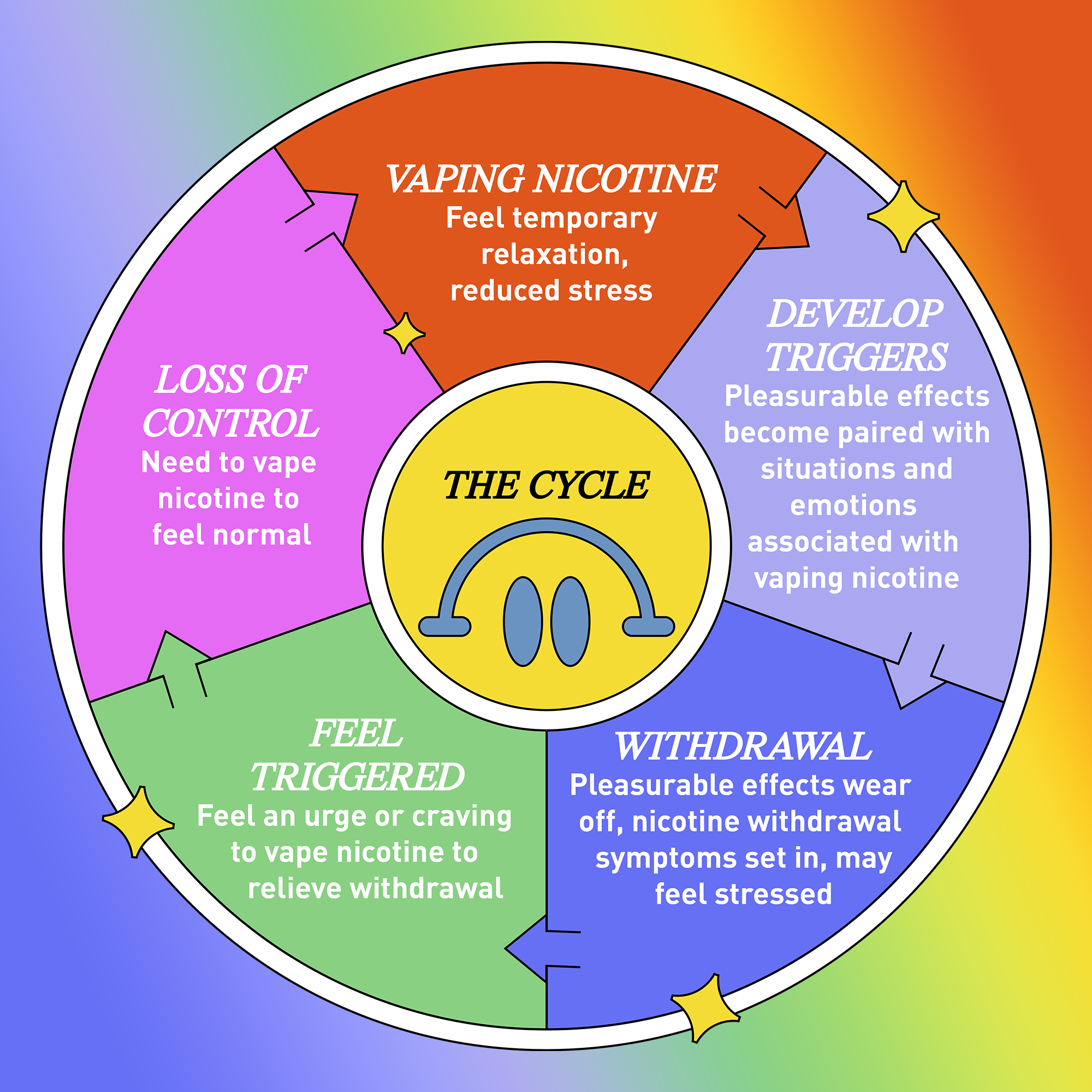 Nicotine feels good to use. And nicotine is incredibly addictive. *And* inhaled nicotine is an inefficient drug, at best.

If you had to take an Advil every 30 minutes for it to work every time you had a headache, you’d be irritated. And extended-release nicotine *does* exist–it’s in a patch. But that’s not what Big Tobacco is selling, right?  Like, they’re selling a product where nicotine reaches your brain within seconds. Seconds! So there’s a damn-near immediate “reward” for using it. But the feel-good effects of nicotine don’t last long, at all. And so, because it’s an inefficient drug, people who are dependent on nicotine start to go into withdrawal and feel irritable/anxious/sad/restless/hangry because the parts of their brain that are wired to crave nicotine are having the brain chemistry equivalent of a complete meltdown and the only way it’s going to stop melting down is with more nicotine.

So, to all the people who swear that smoking and/or vaping make them feel better: We hear you. We believe you. And we understand where you’re coming from. It IS making you feel better, but part of why it’s making you feel better is because you’re not in withdrawal from nicotine any more in that moment. Not because it’s fixing your problems. (Addictive products with enormous advertising budgets historically solve about zero problems.)

The good news is that smokers who quit see improvements in their stress levels AND reduced anxiety and depression. Quitting can be really hard, but it’s worth it. And we can help! Here’s a guide to help you quit nicotine–and what to expect on the way. 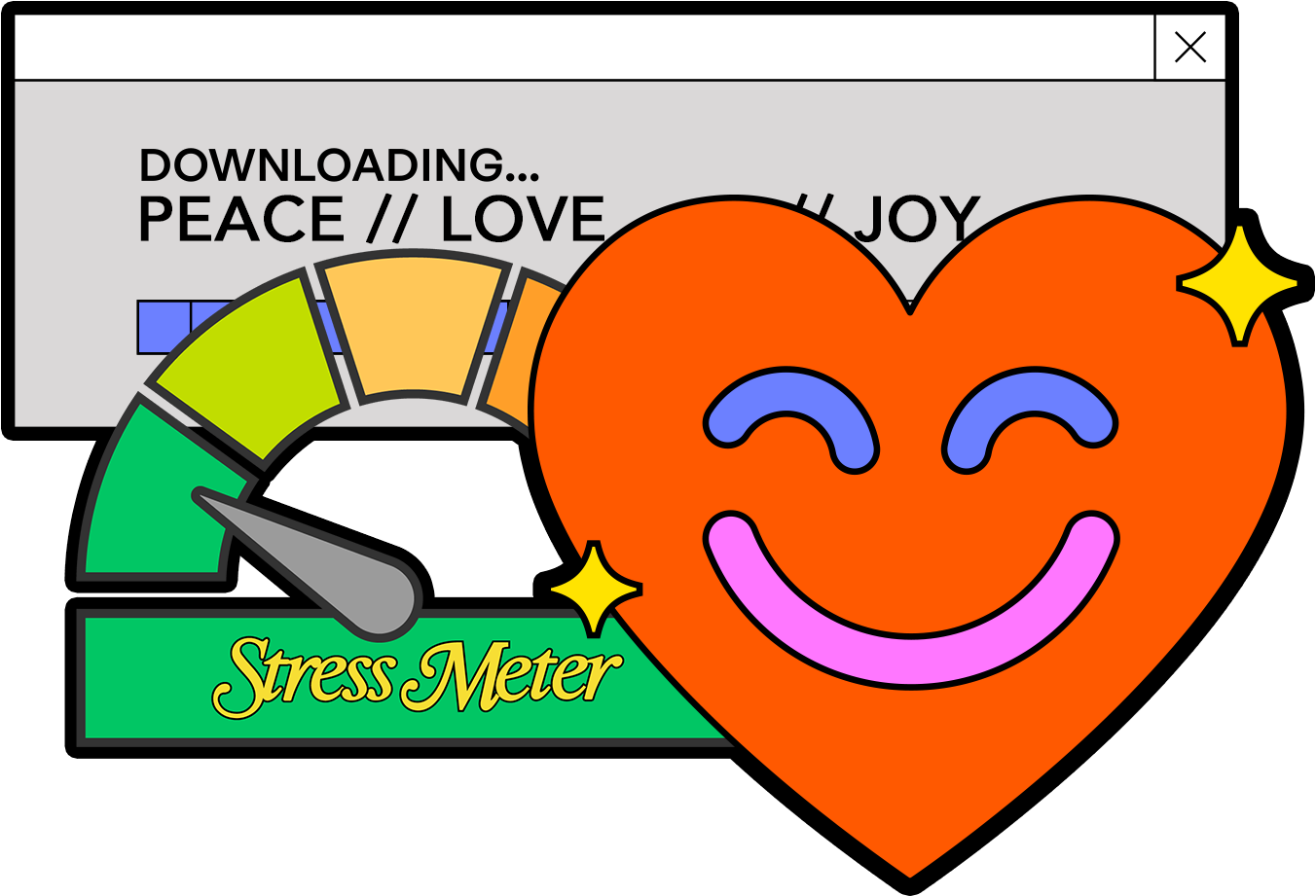 Other ways to cope with stress

Right. So, there are no instant fixes for stress. Even getting up and taking a walk (which we fully recommend) requires effort on your part. So does creating an elaborate blanket fort to hide from stress (unsuccessfully) or baking a cake (which is delicious) or cooking or drawing or making music. It’s remarkably easy to get into a routine where smoking or vaping seem like the only immediate coping mechanism for stress and anxiety. But it’s never the *only* tool at your disposal, and the more you use nicotine as a coping mechanism, the harder it is to find other (better) successful mechanisms–and some of them are MUCH less expensive than vaping.

We recommend having something at your fingertips and within your control. Like focusing on your breathing. It can sound a little woo-woo, but it does work. If you need a little nudge to get started, try the Breathwrk app, where you can try guided breaths.

And if slow, intentional breathing isn’t your thing, that’s fine. We understand how someone telling you to stay calm can potentially have the exact opposite effect. So maybe don’t stay calm? Rage it out, angry bear. Rage it out. (And then make a blanket fort.)